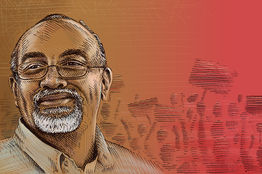 Glenn Loury, the Brown economist, on his winding journey from South Side Chicago to Reagan Republican, to the left and back to the right.

Abolition and the American Founding

A Veteran’s View of American Policing

Violent Protest and the Intelligentsia

The experts are said to insist lockdown is necessary to combat coronavirus. Epidemiologist Sunetra Gupta dissents.

Coronavirus and the Chernobyl Analogy

Edward Luttwak wrote the book on regime change, and he sees parallels between China’s pandemic response and the Soviet Union’s late years.

The Lockdown Skeptic They Couldn’t Silence

Targeted for censorship in March, Aaron Ginn is becoming an influential voice in cities, states and Washington.

An Industry Both Grounded and Up in the Air

Joel Peterson and Robin Hayes, JetBlue’s chairman and CEO, on how the pandemic has racked the business and how flying will be different once it’s over.

What Would You Risk for a Faster Cure?

Michael Milken, the billionaire former financier, is boosting Covid treatments. No one knows which will work, but saving lives and the economy will require a mighty gamble.

The Bearer of Good Coronavirus News

Stanford scientist John Ioannidis finds himself under attack for questioning the prevailing wisdom about lockdowns.

A Girl Makes Music Without Irony or Ugliness

This youthful composer likes to speak ‘directly to the heart.’ Critics won’t like it, but audiences do.

Actor-director Clint Eastwood, 89, weighs in on Bloomberg, Trump, #MeToo and the dispute over a reporter’s depiction in his latest film.

Boris and Britain After Brexit

What’s next after Britain’s break from Europe? Historian Andrew Roberts is bearish on free-market policies but bullish on an alliance of English-speaking lands.

Iván Simonovis went from Caracas police chief to prisoner of Venezuela’s socialist regime—then over a 60-foot cliff to freedom.

Popeyenomics: Why You Do What You Do

Neither ‘rational choice’ nor behavioral economics explains the story of the Good Samaritan. Economist Richard Robb offers an alternative that tries.

Does America Still Have a Common Creed?

The U.S. has an unmatched capacity for absorbing newcomers. Yet historian David M. Kennedy worries that the country no longer agrees on a shared identity or purpose.

The internet turned out not to be an unmixed blessing, but Antonio García Martínez, the author of ‘Chaos Monkeys,’ seeks to calm your fears about privacy and ‘fake news.’