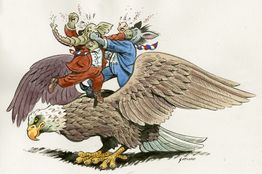 Our House Is Divided. Whither Cooperation?

In “America’s House Divided Cannot Stand” Charles Lipson is equating conservatism with liberalism, as though there is just a civil disagreement over policy.

The idea that the 2,200-mile trail, under which more than 50 pipelines already pass, should become a Berlin Wall separating the Eastern Seaboard from the rest of the U.S. is ridiculous.

Covid-19: Don’t Reach Out and Touch That

Are Democrats Preparing Another Anti-Bernie Fix?

Even if Sen. Sanders enters Milwaukee in July with more than 1,990 “pledged” delegates, I’ll bet that somehow, some way, the outcome will be changed to Sen. Sanders’s disadvantage.

I’m mildly perplexed by Holman Jenkins’s suggestion that aerosol manipulation of the earth’s atmosphere “to offset the warming seen so far” might not be prohibitively costly. What if it worked?

More Coding Instruction Would Be Helpful

Right now, only 45% of high schools across the country offer computer science as an option, let alone a requirement. We’re not even keeping up with demand from students and parents for these classes.

As U.S. ambassador to the U.N., Gov. Haley got to see firsthand the destructive work of socialism in many countries around the world.

The Federal Reserve Should Just Stick to Its Mandates

The Federal Reserve has wandered away from its dual mandates of price stability and full employment, greenlighting any policy action it deems appropriate.

Ideology and the War on For-Profit Colleges

Your authors are correct that this regulation was implemented not to benefit students, but to punish for-profit universities on the assumption that all were evil.

FDR Was Right on Public-Employee Unions

President Franklin Roosevelt wrote that the process of collective bargaining had “insurmountable limitations when applied to public personnel management.”

George McGovern wrote: “I . . . wish that during the years I was in public office I had had this firsthand experience about the difficulties business people face every day.”

Regarding Lance Morrow’s “OK Boomer? Bernie, Biden and Bloomberg Are Older Still”: I think the proposed publication would be better called “Codger and Crone,” but either way, I’ll subscribe.

No Need for a PCAOB If Conflicts Eliminated

All we need is the major pension plans and institutional holders to insist that any organization in which they hold stock be audited periodically by a truly independent auditor.

Why the Big Swarms of Young Sandernistas?

Fidel Castro”s “literacy program,” as Sen. Bernie Sanders likes to call it, was a propaganda and indoctrination system meant to program a captive population to become good comrades and soldiers for the revolution.

Raising the Standards of Candidate Debates

Take the debates away from the networks—they have too little substance, too much focus on au courant frivolousness such as tweet insults and too much time spent on attempting “gotchas.”

Insecure communication systems let hackers infiltrate executive accounts remotely via phishing attacks or attacks on passwords or even on servers.

President Trump’s proposed budget, released Feb. 10, includes a 16% cut to the CDC. The president has also called for a $65 million decrease in funding to the World Health Organization.

Amen to getting your way by removing obstacles. I wanted to work for a local entrepreneur, and we had two good meetings, but no offer emerged.

Huawei Learned Its Pricing Model From the IBM of Old

There’s nothing new about this. It was once called the IBM strategy, i.e., Installed Base Migration.