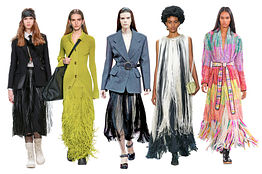 Here are all of the most pervasive women’s trends from a month of fall fashion shows in New York, London, Milan and Paris—from fringe to Nancy Pelosi-esque scarlet coats.

Seven Reasons Why South Korea’s BTS Is an American Phenomenon

“Map of the Soul: 7” is the K-Pop band’s fourth album to top the charts in less than two years. What’s driving the group’s success?

‘Hillary’ Review: Inside the Campaign

Hulu’s four-part look at Hillary Clinton is a chronicle of her life and career.

The first installment of this reboot of a 1980s Steven Spielberg series promises adventure.

‘The Way Back’: On the Rebound

Ben Affleck stars as an alcoholic brought in to coach his alma mater’s failing basketball team.

‘Onward’: Where Did the Magic Go?

Pixar’s latest—about elfin brothers on a quest to reconnect with their dead father—lacks the studio’s usual wizardry.

From the Cradle of Civilization

A new exhibition of Mesopotamian treasures and artifacts sheds light on royal power and everyday life.

With a suit, denim or off-duty sweats, one of these eccentric pairs of shoes will give your wardrobe the extra bit of style you know it needs

The Time Has Come Again for ‘Panic in the Streets’

In the Series ‘Devs,’ a Sci-Fi Muse Tackles a Tech Drama

Sonoya Mizuno has played a robot, an alien and other uncanny characters. In the new FX series, the half-Japanese actress is on

An Ode to Transitional Spring Sweaters and Suits

Can Men Under 60 Wear Berets?

Inspired by runway trends and his well-hatted elders, a twentysomething editor tests the pancake-shaped cap beloved by mimes and pretentious Francophiles.

Inventive Percussion Without a Drum in Sight

At a recent concert, the quartet Sō Percussion played glasses of water, blocks of wood, colored tape and more.

In ‘ZeroZeroZero,’ A Gritty and Global View on the Drug Trade

The eight-part Amazon series is the latest to dig into international crime.

Kvelertak amped up the punk vibe and rediscovered its live-show energy after the group’s original lead singer called it quits.

The first American Donald Judd retrospective in over 30 years is an ode to material and spatial transformation.

There’s a natural appeal to the best accessories of the season, which feature organic elements, from an Hermès commuter bag to studded Loewe slides